What is Common Ragwort

Common Ragwort (Senecio jacobaea) or ragwort as it is mostly known as, is a native UK biennial | FAQ (Gardening) plant that provides food for a wide range of insects but can be a sinister threat to other animals as common ragwort contains toxins called pyrrolizidine alkaloids. Liver damage can occur in horses and domesticated animals if they consume large amounts of ragwort, which contains this pyrrolizidine alkaloids.

Being a native to the UK it would not technically be classified as an invasive species. However, although it is not usually a problem in suburban gardens, but its poisonous toxic qualities make ragwort a serious weed in paddocks particularly, as well as any gardens backing onto grazed fields where horses or cattle are present; making it a serious threat to grazing animals.

Due to the problems caused above Common Ragwort (Jacobaea vulgaris) is scheduled under The Weeds Act 1959 and The Ragwort Control Act 2003, thus producing a Code of Practice for Controlling Ragwort and a Code of Practice for Disposing of Ragwort. Copies of this legislation are available from UK GOV (DEFRA’s) website

How to Identify Common Ragwort?

Year 1 Growth
Ragwort seeds germinate generally from October to June and start to show when they reach around 4-6in (10-15cm) tall, they often remain unnoticed until they reach rosette stage though.

Common ragwort has a spade-shaped leaf with a notch near the top. As the plants dark green or slightly purple-tinged rosette develops, its leaves look irregular and jagged and they can be sparsely hairy on the underside. Even as a rosette, the roots are numerous, relatively thick, and hard to pull up.

Year 2 Growth
The large, flat-topped heads of dense yellow daisy-like flowers are produced from June through to September. The leaves become deeply divided with irregular, serrated edges. While seeds mature in July and August, they are shed from September onwards. Thousands of seeds are produced by one plant, and may lay dormant for years.

The tough, red-tinted stems near the base of the plant are branched and green, while the upper sections are bright green and branched. A mature plant may range from 12in-40in) (30-100cm) in height with a wide-rooting system. Roots may fork and send out additional roots as well as branching and spreading. Ragwort is a deep-rooted plant. 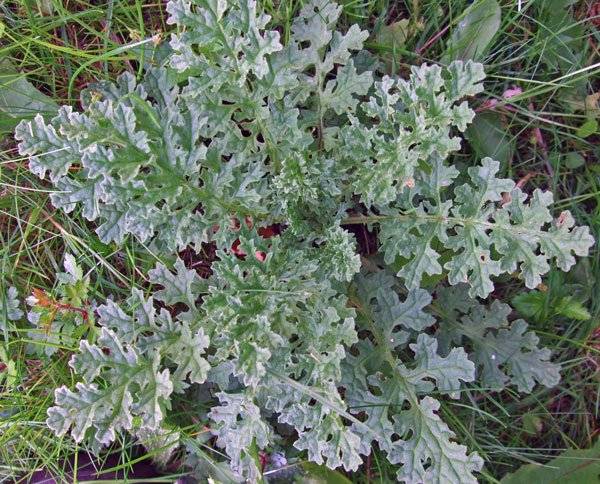 Although organic control (digging out, cutting and burning) of common ragwort is possible for a small ragwort infestation, its not a good practical solution.

The procedure of cutting ragwort at the early flower stage would certainly reduce seed production but boosts the development of side shoots, resulting in a more vigorous growth the following year.

These plants are a significant threat to grazing animals, as they may still set seed even if they are cut. The plants should be removed and burnt. Pulling is useful where weed quantities are low, but the advantage is only temporary. Any roots left in the soil will generate new plants. 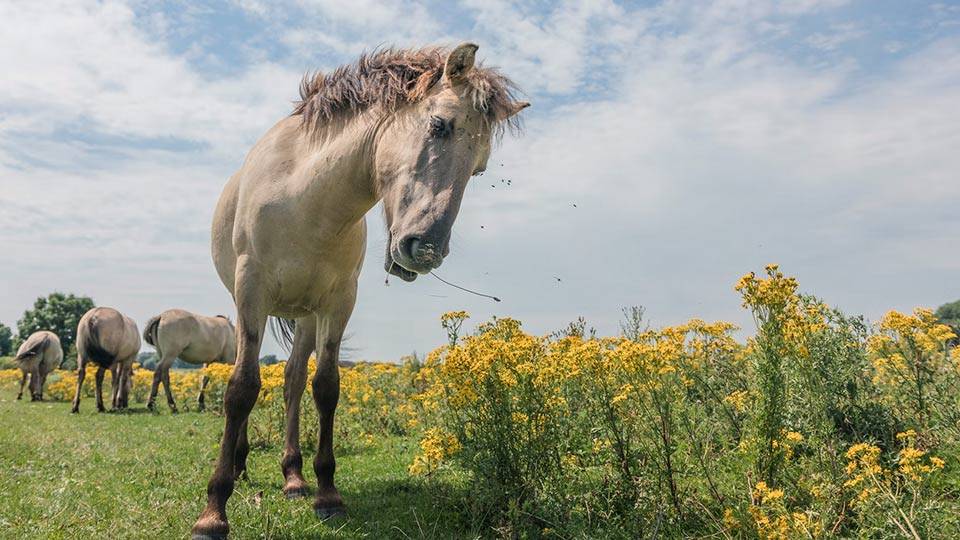 Horses and Cattle That Graze on Common Ragwort (Jacobaea vulgaris) Can Develop Serious Liver Damage Due to The Plants Toxicity.

Weedkiller For The Control of Common Ragwort

Many experts now say that the main objective in ragwort control should is to eliminate plant roots and plant material before they spread the weed, and spot-spray the rosettes with a herbicide as well.

As gardeners we will probable deal with ‘small’ infestaions. Then try Glyphosate based weedkillers like Round Up Ultra or Westland Resolva Pro these are now commonly used as a longer-term solution to eradicate the weed. Although the use of ‘glyphosate’ is controversial, as it has been the subject of numerous cancer lawsuits around the globe, it is still a powerful and effective tool in the fight against the common ragwort.

Care though should be taken when applying such a weedkiller as ANY green plants it comes into contact with will be killed also.

Although Common Ragwort gets very bad press due to its toxicity, as far as wildlife is concerened, their are many many insects, beetles and bees that rely on the pollen of the common ragwort for food.

Probably though, the most famous inhabitant is the Cinnabar Moth (Tyria jacobaeae). Ragwort is a common host for cinnabar moth caterpillars. These black and red moths look a lot like butterflies, but their bright yellow and black caterpillars are a strong warning that they are poisonous.

The moths start out as yellow and black caterpillars and become especially fond of ragwort. They warn prey that they are poisonous by means of their bright hues, but they only become poisonous after feeding on the ragwort.

When winter is over, cinnabar moths are found as cocoons in the ground. Identifying Cinnabar moths is fairly simple. They are slate-black with two red spots and two pinky-red stripes on the rounded forewings. Their hindwings are pinky-red and bordered with black.  Cinnabar moths can be spotted flying day and night and are frequently misidentified as butterflies. 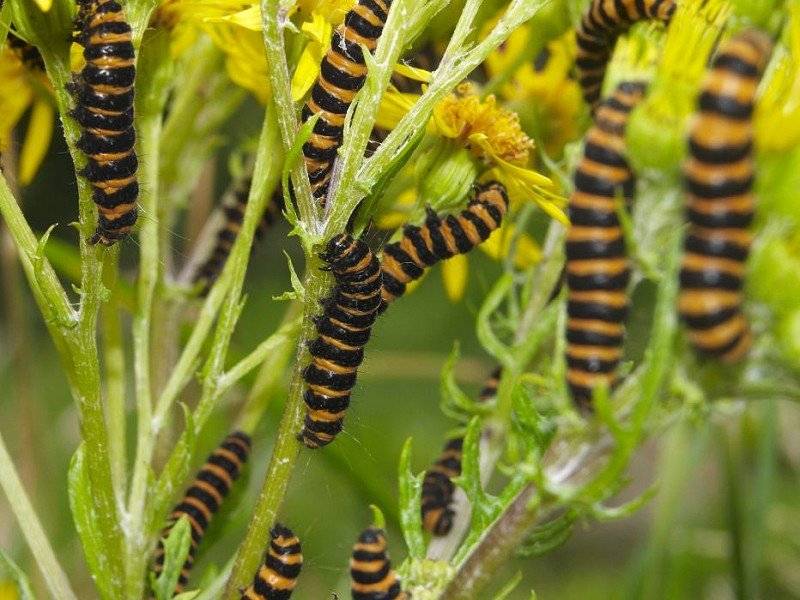 Can You Handle Ragwort?

Handling the plant, breathing its pollen, or coming into physical contact with it doesn’t pose a significant risk to a human’sliver health. Mild toxins can be absorbed through the skin in minute amounts, but these don’t pose any serious threat to the public. We would however, always recommend avoiding skin contact with ragwort.

Is Common Ragwort Native to The UK?

Yes, the common ragwort and other ragwort species are said to be native to the British Isles, thus becoming an intrinsic part of our fauna and flora, in addition to invertebrates and other wildlife they sustain.

Is Ragwort Poisonous to Dogs?

If your dog eats enough of the ragwort plant, any part of it, irreversible kidney and liver failure can result.

Ragwort Provides Food For a Whole Host of Insects, Beetles and Bees.

Common ragwort (Jacobaea vulgaris) is a perennial, sometimes annual, toxic weed of fields and grassland, in woodlands, along roads and railroads, in waste areas and along ditches.

It is capable of reproducing from seed and from cut plants unless all the rooots are removed. Although the plant is often mistaken for a wildflower, it is actually a weed and can be found in cultivated areas, particularly in or near to fields where livestock or horses graze.

If you find this page useful, don’t forget to visit our FAQ page for more gardening tips, tricks and information on a whole host of subjects for the home and garden.

Reading Time: 13 minutes Leading up to and during the festive season a front-door wreath is essential for every home…

Reading Time: 18 minutes New to the UK market, robot lawn mowers are becoming increasingly popular as a hands-free alternative to. Reading Time: 15 minutes Certain types of arthritis can be a burden for gardeners, causing difficulty with cutting back vegetation and pruning.